BOSTON (CBS) – Travel organization AAA is warning drivers to restrain their pets on road trips, adding that more than 10 percent of people surveyed admitted to taking pictures of their pet while behind the wheel.

A recent “Consumer Pulse” survey found that while 38 percent of pet owners bring their animals with them on road trips, more than 37 percent admit to never restraining their pets in the car.

“This poses a serious risk of injury or even death for either your pet or anyone else in its path, reinforcing the importance of restraining your four-legged friend every time they are in the car.”

According to the AAA survey, about 13 percent of pet owners admit to being distracted by their pet while driving.

The most common distraction was drivers petting their animals, with 42 percent admitting to doing so while behind the wheel.

Seventeen percent of drivers admitted to giving food or water to their pet, while 12 percent said they have taken a photograph of their pet while driving.

In order to assure safety of both humans and animals, AAA recommends drivers use restraints for their pets while on the road.

“A restraint will not only limit distractions, but also protect you, your pet and other passengers in the event of a crash or sudden stop,” Stracke said.

For tips on traveling with your pets, visit the AAA website. 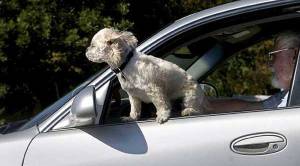